Message for the Southern Border Initiative in Texas

Message for the Southern Border Initiative in Texas

First Question - How did the Initiative get started?

It got started when the El Paso Diocesan Deputy Joey Grillo sent a request on May 5, 2019 to State Deputy Mark Evans, State Charities Director, Boyd Burris and the Texas Charities Board. The request was for $7500 to help with financial aid. The councils in El Paso had been financially covering expenses to purchase food, cook meals and to rent showers for the refugees. It was costing $1,500 a day to rent the shower. The council and parish had already spent $54,000 over the past 18 weeks. The parish and the councils were simply running out of money.

Supreme Director, Terry Simonton, looked over their list of needs and noticed that the Priest was asking for a heated portable shower costing $9, 000. State Deputy Mark Evans and Supreme Director, Terry Simonton, agreed this could be something the Texas Charities board could help with. We also felt like this would be something the Supreme Council would want to be a part of. Terry Simonton made a few calls to Supreme and they asked us to send them more information. We sent the request on behalf of Mark Evans to Supreme to see if they would cover the cost or at least share half the cost of the shower. Supreme agreed that this is something they needed to be a part of. When the request was sent to Supreme Knight, Carl Anderson, he said we needed to do more and that is when our Supreme Knight created the Southern Border Initiative. At that time, Supreme Director, Terry Simonton, and State Secretary, Alfredo Vela, were appointed to the Southern Border Initiative.

The first distribution was in El Paso, Texas and Ciudad Juarez, Mexico,

Second Question – How did the Initiatives go in Texas?

We were blessed at the first distribution on October 5, 2019 to have had Bishop Mark Seitz from the El Paso Diocese and Bishop Jose’ Guadalupe Torres-Campos from the Juarez Diocese along with Fr. Javier Calvillo the director of Casa del Migrante with us that weekend. We were also joined by Assistant Diocesan Deputy Art Aguirre and 14 Knights from Texas, Mexico Northwest State Deputy Cesar Estrada Trevizo and 50 Knights from Mexico along with 75 to 100 refugees. The distribution was a fully packed 18-wheeler with over $61,000 dollars of supplies. Among other items, the supplies consisted of infant items, underwear, socks, toiletries, personal hygiene items, food, powdered milk and shoes. Both Bishops blessed the supplies and then both spoke to the writers and reporters. Alfredo Vela,the State Secretary of Texas gave the audience a message of thanks in Spanish. Terry Simonton presented a check on behalf of the Knights of Columbus and our Supreme Knight Carl Anderson for $15,000 dollars to Bishop Torres-Campos for additional help in supporting other shelters in Mexico. The Bishop thanked Supreme Knight Carl Anderson for the gift.

The second distribution was on October 31, 2019. We were blessed to have had Bishop James Tamayo from the Laredo Diocese and Bishop Alonso Gerardo Garza Trevino from Piedras Negras along with Sister Isabel Turcios, the director of Frontera Digna Migrants’ house.

We were also joined by Diocesan Deputy Angel Luna and 20 Knights from Texas. Also in attendanceMexico Northeast State Deputy Juan Quintanilla Balcazar and 25 Knights from Mexico along with 70 to 75 refugees. The distribution was many small trucks making several trips back and forth to the shelter. The supplies consisted of the same as Juarez but blankets were given and not shoes. Both Bishops blessed the supplies and then answered questions from the reporters. Alfredo Vela, once again, gave a message in Spanish thanking everyone for their attendance. Terry Simonton presented a check to Bishop Trevino for $7,500 dollars to help other shelters in Piedras Negras, Mexico. Bishop Trevino thanked the Knights of Columbus and Supreme Knight Carl Anderson for the gift.

The third distribution was on December 13, 2019. We were blessed to have Bishop Eugenio Lira from Matamoros, Mexico, Bishop Daniel Flores and Auxiliary Bishop Mario Aviles from the Brownsville Diocese along with Fr. Francisco Gallardo Lopez , the Director of San Juan Diego and San Francisco de Asis Migrants’ house. We were also joined by Diocesan Deputy Jose Garza and 6 or 7 Knights from Texas, State Deputy of Mexico Northeast Juan Quintanilla Balcazar along with 50 to 60 Brother Knights from Mexico and had 90 to 100 refugees in attendance. Several trucks brought the same type supplies to the shelter as they delivered in Piedras Negras. The Bishops blessed the supplies and they once again answered questions from the reporters. Alfredo Vela gave a message to everyone in Spanish and once again on behalf of the Knights of Columbus and Supreme Knight Carl Anderson, Terry Simonton presented a check to Bishop Lira and to Bishop Flores to help them support other shelters on their borders. Both Bishops thanked the Knights of Columbus and Supreme Knight Carl Anderson for the gifts.

Third Question - Why were the Knights there?

The only reason we were there in Juarez, Piedras Negras and Matamoros was that the refugees were in desperate need of help. At every distribution the refugees were so appreciative and they also helped in taking the supplies from the trucks to the shelters. There is no doubt that these distributions have helped the shelters and change the lives of the refugees for the better. It has also changed the lives of the Knights that were a part of the distributions. Many of the refugees kept coming to the Knights and thanking them for their help. The Knights of Columbus is always ready to help, that’s just what we do, help. Charity is the First principle of our Order and it will always be our First Principle.

Fourth Question – How did the Knights from Mexico and Texas work together.

Fifth Question – What did you feel from these distributions?

The smiles on the faces of the children and their parents were priceless. We should feel proud to be Knights and what they did in Juarez, Piedras Negras and Matamoros. 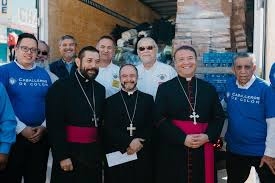 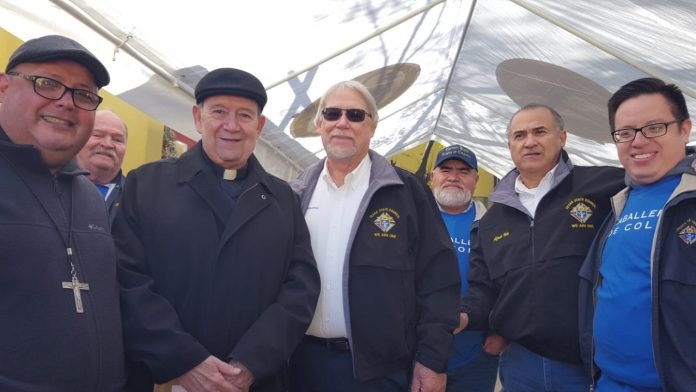 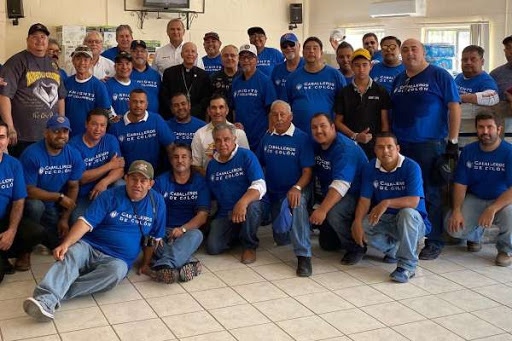