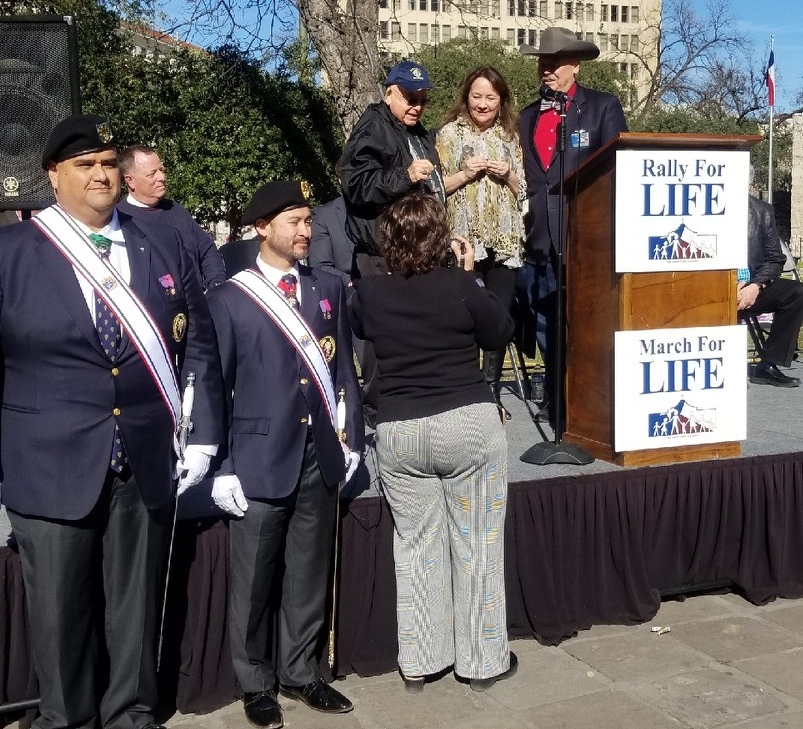 Tom Krueger had the honor of presenting the Special Forces A.C.E wings to the First Lady of our great state of Texas, Cecilia Abbott and the Most Reverend Michael D. Pfeiffer O.M.I. (retired Archbishop of the San Angelo Diocese), in recognition of their continued public support for Pro-Life causes.

When the First Lady left the event she was proudly wearing her Special Forces Wings.

I was assisted in the presentation by District 2 Master Herman Poothong and District 2 Marshall Jaime Piedra acting as an Honor Guard.

Those in attendance were reminded of Mrs. Abbott's comment on the power of the Ultrasound Machine as a window to the womb. The assembled crowd was made aware of the Knights of Columbus Ultrasound efforts and the recent milestone marking the successful placement of the 1000th Ultrasound machine in a Crisis Pregnancy Center. The crowd was also made aware of the successful local effort in the early stages of the Knights of Columbus Ultrasound program, placing one at one of our three local Crisis Pregnancy Centers, Allied Women's Center.

Bishop Pfeiffer continued his Pro-Life activities Monday January 21 by leading about 40 people in a prayerful Rosary at Planned Parenthood in San Antonio. Several of our San Antonio Diocese Knights joined him in support of his prayerful protest.