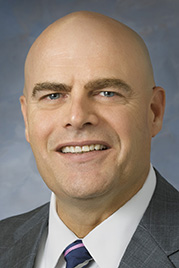 In March of 1882, in the basement of a small church in New Haven, Connecticut, a young parish priest met with two dozen men to discuss forming a Catholic fraternal organization to serve the needs of those parish families in financial need due to the illness or death of a family’s primary bread winner. It’s safe to assume that while Father Michael McGivney knew great things could be accomplished by the forming of such a group, it is unlikely that the men in that room knew that 100 years later the efforts of that meeting in the basement would lead to the Knights of Columbus becoming the largest Catholic fraternal organization in the world.

As it stands today, The Knights of Columbus has more than 15,000 local units in the United States, Canada, the Philippines, Mexico, Poland, the Dominican Republic, Puerto Rico, Panama, the Bahamas, the Virgin Islands, Cuba, Guatemala, Guam and Saipan – with recent expansion into Lithuania, the Ukraine and Korea. The Order insures the lives of more than 1.2 million men, women and children. Each year the Order sets new records for both charitable donation and man-hours volunteered. Over 130 years later, the history of the Order is filled with great men. However, to focus on these things is to perhaps lose sight of the true legacy of the founder of our Order. The legacy of Father McGivney does not lie primarily in size of the Order or the volume of its deeds. Rather, his true legacy lies in his enduring faith in the laymen of his parish, and their ability to have a profound impact locally and on a much larger scale. It can be argued that this belief in the laymen of his parish made Father McGivney a man far ahead of his time.

Decades before Vatican II established a specific and greater role for the laity of the Church, Father McGivney believed Catholic layman had a unique role play in the advancement of the welfare of their Church and the communities they served. Supreme Knight Carl Anderson has stated that Father McGivney serves as a model for the parish priest of today on how to encourage laity to become active participants in their parish.When Father McGivney founded the Knights of Columbus, he provided Catholic laymen with an opportunity: the ability to grow spiritually while at the same time actively contributing to their parishes and communities.

­As His Eminence Tarcisio Cardinal Bertone, S.D.B stated in his address to the Knights of Columbus 125th Supreme Convention “[Father McGivney] had a deep appreciation for the special characteristics of the lay vocation as being thoroughly immersed in the spheres of the family, civil society, and public life. He made it his goal to develop practical ways of ensuring that faith could be put into concrete action.” In other words, Father McGivney understood that the Catholic layman ultimately had a very unique role in influencing society, if given the chance. And the Knights of Columbus gave the laymen of the Church that chance by empowering them “to be actively and fully engaged in the life of the Church by exercising virtue, cultivating prayer, and caring for others.”

Born on August 12, 1852, Father Michael J. McGivney died on August 14, 1890 at the age of 38. While his years as a priest were brief, his legacy and his vision endure. In this, the month we commemorate both his birth and his death, let us celebrate that legacy: a vision of a strong, faithful, and dynamic laity, one actively building a better world one parish and one council at a time. Vivat Jesus! Viva Cristo Rey!