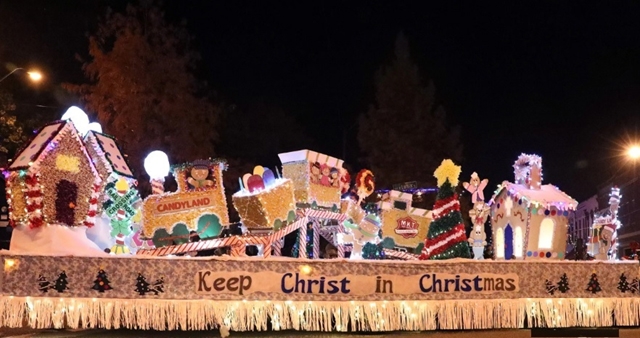 What started out as an effort by Council 830 to increase its visibility in the community has blossomed into an award-winning program in the Faith in Action module. Back in 2015, in what was a modest beginning to their efforts, Council 830 entered a float in the local Christmas Parade. The idea was to raise awareness of the Knights of Columbus, St. Patrick Catholic Church, and the mantra of Keep Christ In Christmas. During the first three years, the first efforts were fine but lacked a certain level of pizzazz that was needed to make a lasting impression on the parade judges and the community. The Council chose to increase their commitment to really take their effort to an award-winning program. They decided to raise the financial investment, focus time on task, and increase energy level to bring the program to a force to be reckoned with. Beginning in 2018, this effort was led by a core group consisting of Michael and Lisa Schindler, Larry and Ann Higginbothan, Jim and Lisa Oborny, John Hanel and Tony Falcicchio. In 2020, the Texas Knights of Columbus State Deputy challenged the Knights of Columbus to Make No Excuses and Be Not Afraid. The council could have used the pandemic as an excuse to not participate in the program or even been too afraid to gather to construct the Christmas float. But Council 830 in Denison, Texas took the challenge to heart and decided that even during the midst of a pandemic, they would put forth their absolute best effort in the program. With a great amount of time and energy devoted to their creative float design, they produced a winning entry! In December, the Keep Christ In Christmas float of Council 830 won the Grand Prize in the Denison Christmas parade. The next week the float was entered in the Christmas parade of the nearby town of Sherman. Considering the ongoing friendly rivalry between the two communities, the Knights knew that their entry would have to be fantastic to win an honor in the Sherman parade. The float from Council 830 was so exceptional that it took Grand Prize in the Sherman Parade too. This program is an example of what the Knights of Columbus are about. They take pride in their faith, parish, and community and use programs to promote these values and bring greater awareness to the positive modules of the Knights of Columbus. Council 830 makes no excuses and strives to be a top council in all its programs. It is a growing and successful council. They are not afraid to take on new challenges or to make commitments for improvements in their parish and community. Council 830 is a prime example of the Knights of Columbus and their efforts to build vibrant councils in each parish and community.