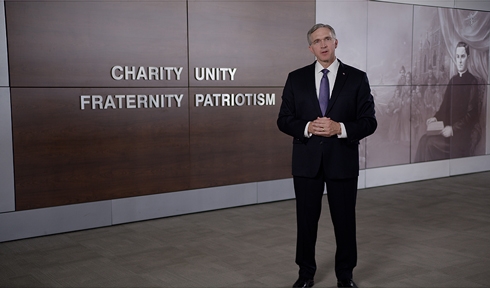 In his first annual report to the Order, Supreme Knight Kelly urged his brother Knights to find creative solutions to adapt to the challenges of the pandemic and other cultural challenges facing Catholics today.

“On every front, the end of the pandemic is an invitation to action,” the supreme knight said. “Charity is our highest calling, and it demands our renewed focus. Where there’s pain, let us heal. Where there’s grief, let us comfort. Where there’s need, let us meet it, in new and creative ways.”

Supreme Knight Kelly committed his tenure to strengthening the faith of men and their families. “Our growth depends on empowering men to be the husbands and fathers that God wants us to be,” he said. “It is harder than ever, and for that reason, we must push forward as never before. It will require creative courage.”

‘Bold in Faith’
When Supreme Knight Kelly, who took office March 1, was officially installed as supreme knight June 11, his first act was to consecrate his administration to St. Joseph.

In remarks at that time and also in his annual report, he called St. Joseph the “Guardian of the Family” and “Guardian of the Truth.” He said Knights, too, must be guardians of the family against a hostile culture, and must defend the truth during a time in which “key truths — about life, marriage, the nature of the family, and the meaning of freedom — are increasingly denied and even vilified.”

A K of C-produced documentary about the life of St. Joseph, titled St. Joseph: Our Spiritual Father , will air on ABC affiliates starting Oct. 10.

Supreme Knight Kelly also announced the Order’s support for the National Eucharistic Revival, an initiative to be organized by the United States Conference of Catholic Bishops.

“Working with our bishops and priests, we will strive to renew belief in the Eucharist and build up the Church,” he said. “We are a force for unity, and we will prove it by pointing to the source of unity. As ‘Knights of the Eucharist,’ we proudly proclaim this truth.”

Called to ‘Creative Courage’
Supreme Knight Kelly suggested the other man whose example each Knight should follow is Blessed Michael McGivney, the founder of the Order. Though he also lived in a time when the Church and its families faced a hostile culture, Father McGivney did not shrink from those challenges.

“In the mold of St. Joseph, he stepped into the breach, with creative courage,” he said. “Father McGivney listened to the Lord, fought for the family and the faith, and devoted himself to our Blessed Mother.”

Father McGivney successfully rallied the men of his parish to lead lives of charity, unity and fraternity, which the supreme knight argued are still the solutions to the most serious problems of our time.

“By elevating our founder, the Lord has called us to greater depths of courage and faith, and greater heights of charity, unity and fraternity,” he said. “In the beatification of Blessed Michael McGivney, the Lord has not only confirmed where the Knights have been in the past. He is showing us where we must go in the future.”

“The fight for life has many fronts. They all require our creative courage, and the coming year will be pivotal,” the supreme knight said. “I look forward to the day when together we march to victory!”

Fraternal Giving
Supreme Knight Kelly thanked Past Supreme Knight Carl Anderson for his 20 years of faithful leadership, during which time the Order grew dramatically in every measurable way: “Our charitable donations soared by more than 60%. Insurance in force nearly tripled. Membership rose by nearly 400,000 and surpassed 2 million. And the Order expanded internationally for the first time in a century, to Europe and mainland Asia.”

In 2020, the supreme knight reported, the Knights of Columbus donated more than $150 million and volunteered more than 47 million hours to serve their communities, despite the challenges of the pandemic.

Under the banner of the Leave No Neighbor Behind initiative, Knights donated nearly $7.7 million to community and parish projects, as well as 1.2 million pounds of food and almost a quarter million pints of blood. They supported nearly 300,000 struggling parishioners and brother Knights, with a special focus on Indigenous families across the continent.

Those charitable efforts were completed alongside the Knights’ ongoing activities, including these highlights from 2020:

The supreme knight also reported the Knights of Columbus Charitable Fund is off to a strong start: “After just 18 months, we already have $14 million in assets, and we anticipate robust growth in the coming months.”

Fulfilling a Call to Service
Supreme Knight Kelly concluded his report with a final word on how St. Joseph and Blessed Michael McGivney can serve as examples for all Knights in leading through service and courage to overcome the hurdles facing our families, the Church and our culture.

“Let us summon the creative courage to fulfill the calling that our Lord has placed on our hearts. And let us take comfort in the knowledge that the work of our Order is far from over,” he said. “The work of the Knights of Columbus is only beginning — and we are the ones who will carry it forward.”
Find additional coverage of the 139th Supreme Convention at kofc.org/convention.