Mother’s Day is always a special day, but for 14-year-old Derrick Martin and Financial Secretary Ken Giromini, their families, and members of St. Ann’s Catholic Church in Canyon, Mother’s Day, May 9, 2021, was extra special. Bishop Patrick Zurek of the Diocese of Amarillo graciously came down to Canyon for the dedication and blessing of the St. Ann’s Memorial to The Unborn.

St. Ann’s Knights of Columbus Council 7840 member Manuel Vega had conceived the idea of a memorial to the unborn including babies aborted or who died before birth several years ago. He presented his idea to the Knights, and they came on board immediately as did Father Robert Busch. However, Father Busch’s decline in health and untimely death in August 2019, followed by COVID, stalled the project.

So perhaps in a mysterious way, the Knights’ original plans for the memorial were deliberately delayed, waiting for Derrick to come into the picture. Derrick had set his sights on completing the Eagle Scout award, and coincidentally, Derrick stated that “I wanted to do a project for St. Ann’s because I go to church here”. Early last year (2020) he approached Father Scott Raef, Pastor at St. Ann’s, about project opportunities. “He gave me a lot of ideas, and this one (the Memorial to The Unborn) stuck out to me because it had a lot of meaning.”

The Knights ordered the 3,000 lb. black granite monument through Next in Stone on the Canyon E-Way. It was originally to come from China, but the Knights decided to pay a little more and get the stone from India.

The 62” high and 36.5” wide monument has a cross laser cut through the middle, with etchings of Mary and Elizabeth on each side of the cross, representing the moment John leaped in Elizabeth’s womb as Mary, pregnant with Jesus, approached her. The scripture beneath it reads, “For the moment the sound of your greeting reached my ears, the infant in my womb leaped for joy,” Luke 1:44. “It talks about the value of human life from conception to natural death,” Vega said.

On the other side of the monument is an etching of a dove over a baby asleep on angel wings. The words say, “In memory of all children who have died before birth, especially the victims of abortion. ”Vega described it as “more of a meditative side, more of a spiritual reflection.”

Martin’s design includes benches, pavers, lighting, trees, and plants. He has spent 107 hours on the project. That included drawing the plans, leveling the ground, pouring sand, laying pavers, and pouring concrete. “This was a construction project,” Martin’s mother, Lori said.

Martin’s Scout Troop 86 of St. Paul’s United Methodist Church had two Scout workdays to help. Approximately 20 Scouts and leaders, some from other troops, helped lay more than four pallets of pavers and did dirt work.

And this is where FS Ken Giromini came into the project. As Derrick’s mother, Lori states, “Ken was instrumental at every phase of the project and cared deeply about completing the project. Total volunteer hours were 658.75 to be exact and the Knights contributed more than 200 hours, with a large portion of those hours volunteered by Ken”. He was there to help with placing concrete, rough grading the site, concrete installation, repairing damaged sprinkler lines caused during excavation, preparation for brick work and cutting bricks during the installation process, etc. etc. Ken installed the CMU bench bases and bench tops. In short, Ken was instrumental in the completion of the project for the Mother’s Day dedication. Sadly, a little over 2 weeks after the dedication, Ken fell off a ladder and severely fractured his right leg forcing him to be immobile during an anticipated extended healing process. On the morning of July 7th Ken Giromini unexpectedly passed away at the age of 60, possibly due to the stress from the leg fracture, leaving behind his beautiful wife of 35 years, Ramona, and 3 adult daughters, Tasha, Tyla, and Trisha.St. Ann's Knights of Columbus Council 7840 lost a wonderful Knight and great Financial Secretary who relished his responsibility and spent many hours organizing all the various areas that this position involved. With his home remodeling skills, he had worked on several projects in and around St. Ann’s and as Father Scott said at the funeral, Ken’s fingerprints are everywhere.He will truly be missed. May Ken's soul and the souls of all the faithfully departed rest in peace.

When Derrick started the project last year, he thought it would be finished in the fall, and he would be an Eagle Scout by December while he was still 13, but nothing happened for six months because of COVID. The monument finally arrived in March.

“For me, it was very emotional,” Vega said. “Once it’s in place and all is done, we have a complete church.”

Derrick Thomas Martin, now 14, earned his Eagle Scout at his Eagle Scout Court of Honor ceremony on July 9, 2021, 2 days after Ken passed away .And during the ceremony, Derrick stopped all activities for several minutes to commemorate Ken’s passing, asking for silent prayers.

“Eagle Scout isn’t just a project; it’s skills and leadership,” Martin said. “It equips you for life.” Vega agreed. “This is one accomplishment of many to come (for Martin),” Vega said.

Lori said reaching Eagle Scout is the culmination of eight years of scouting. “We are proud of him,” she said. “He’s done this all on his own initiative. We have not had to push him to get merit badges and rank up in scouting. As far as the project, time will tell the significance of this project because it may save the lives of babies. It may be a place where people can heal. It’s designed to be a place of prayer and reflection.”

Grand Knight of St. Ann’s Knights of Columbus Joe Shehan, who was instrumental in the monument’s design, also praised Martin.“It’s been a pleasure working with our Knights of Columbus and with Derrick,” Shehan said. “Father Scott has worked with us, and family and church members donated their time, talent and treasure. We are proud of Derrick making Eagle Scout, a coveted award.”

And Joe would know as he has 2 sons who have achieved the Eagle Scout rank.

Seeing the monument blessed on Mother’s Day won’t be the end for Martin. “I don’t feel finished,” he said. “This is just the beginning of the rest of my life. 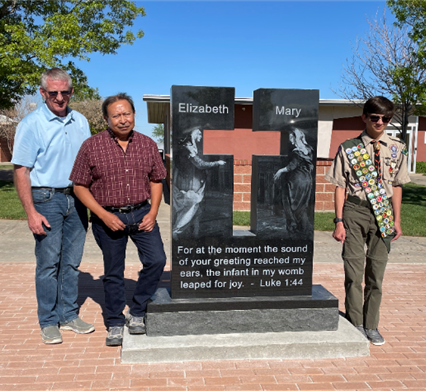 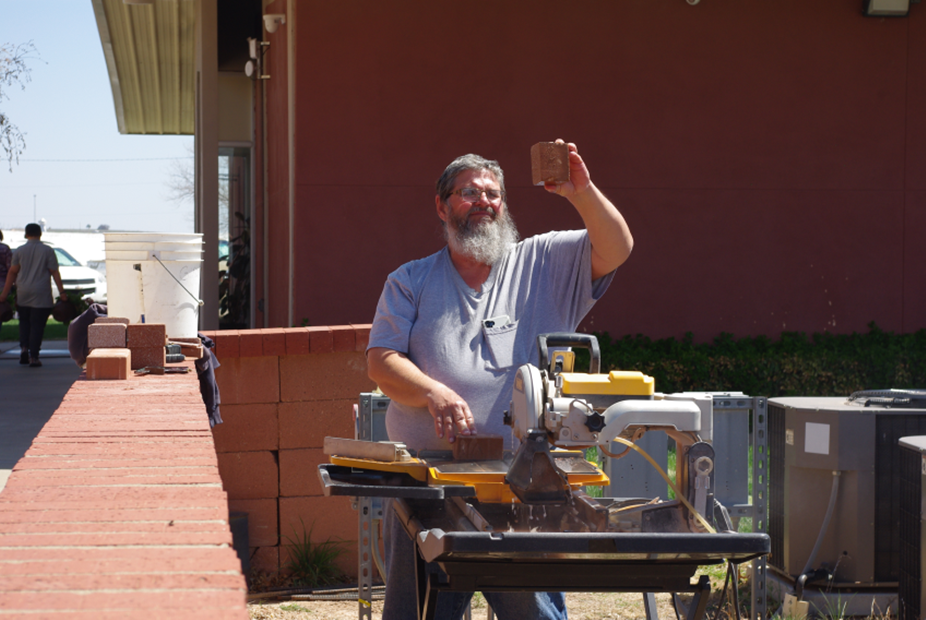 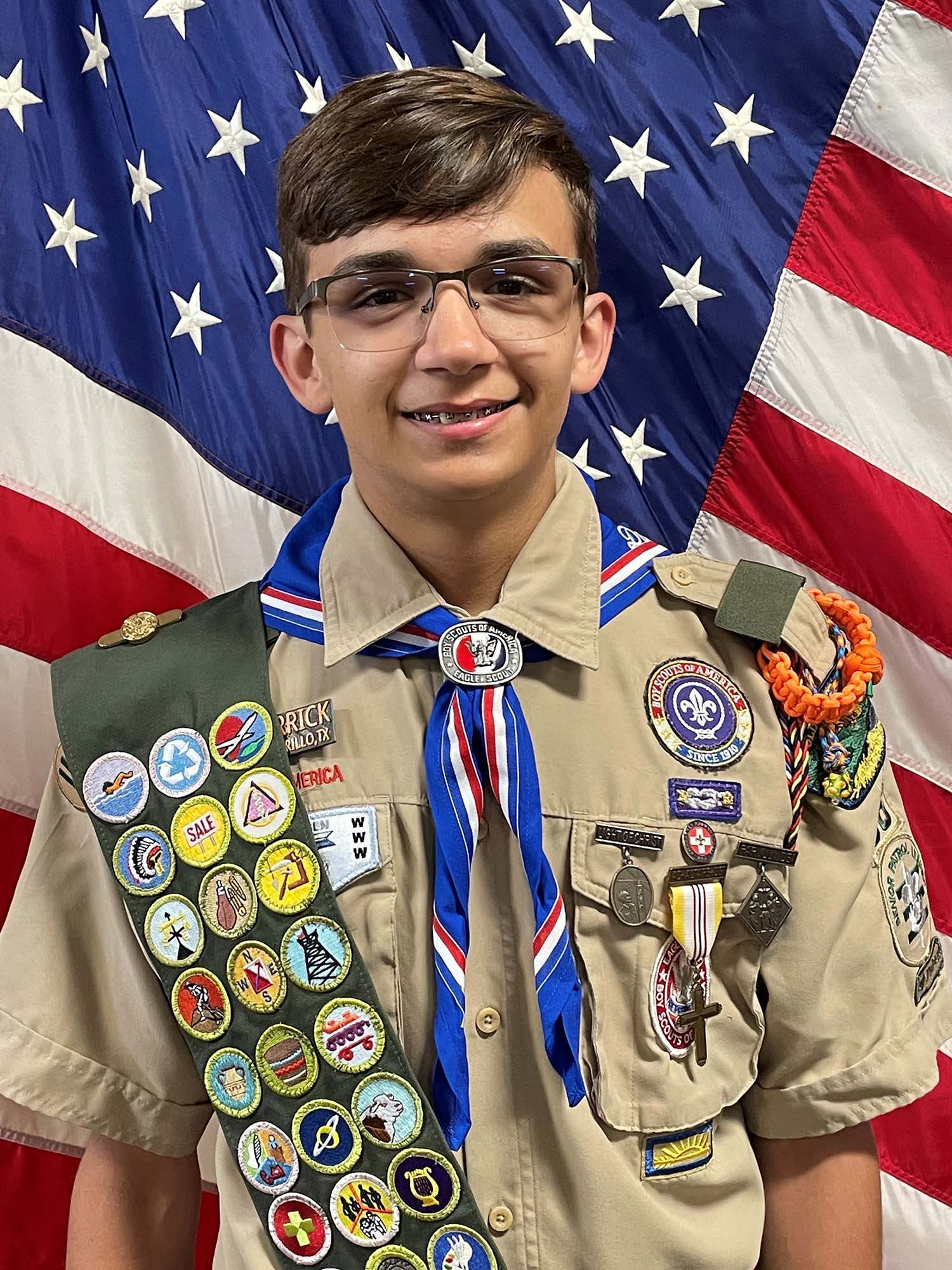